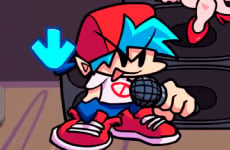 Tom and Jerry: I Can Draw

The Tom and Jerry: Broom Riders

Mickey And Friends in Pillow Fight

Tom and Jerry in Refriger - Raiders

Tom and Jerry in Trap Sandwich

Farmer for a day

Project Borgs Is Out Of Control

Reaper of the Undead

What are Tom and Jerry games?
The games in this category are the ones that feature Tom And Jerry (Animated Characters from the famous Cartoon Network series) who annoy each other, making jokes and having fun, the series was created by William Hanna and Joseph Barbera, It is one of the series with the most awards won competing with Silly Symphonies from the Walt Disney company.
Tom and Jerry are currently one of the most beloved series by all, the plot focuses on the various times Tom tries to catch Jerry, The original series began airing in the year 1940 to 1967, many believed that the famous series had arrived. to an end, but later Cartoon Network would announce a Reboot with better animation and more colors adapted for that time, the series is currently paused and the fate of Tom and Jerry is not yet known, a series that was very loved and is remembered fondly, The series were produced by the Hollywood studio of Metro-Goldwyn-Mayer from 1940 to 1960, since later the series would be in command of Rembrandt Films in Czechoslovakia, and by 1963 the series would again be in Hollywood with Sib-Tower 12 Productions.
Here at kiz10 we have many games based on this beloved cartoon which we will show you right now.
The best games of Tom and Jerry
Tom And Jerry Broom Riders: This game starts with Tom and Jerry fighting for Tom to release him, through the fight Jerry accidentally uses the magic bar and everything starts to float, as they know they will be in trouble if they don't fix that they grab a flying broom and they will have to collect the clothes and decorations of the witches, this is where we will begin to control them, we will have to avoid colliding with different obstacles that will be put in our way, we will have 3 lives and each one will be lost if we collide with something, the game will go by levels and each one will get more difficult than the previous one, each time there will be more pieces to collect and the trunks and bats will be placed in a position that will be difficult to avoid, the game has music, but we can also turn it off if this bothers us too much, the game is very fun and it will surely make you have a good time, this game is available for mobile devices, ipad, iphone and android.
Run Jerry Run: In this game we will control Jerry who must escape from Tom after we stole a cheese, we will have to jump from shoes, slippers, sofas and tables we will have to be careful because if we crash many things, we will lose our lives and Tom will capture us to use as seasoning.
you will have to jump using your left click to double jump, we will have to collect the maximum amount of cheese possible without Tom catching us, we will be able to try as many times as we want but the cheese scores will be restarted, a very fun game that you can play if you are a fan of RUN style games.
Tom and Jerry Mouse Maze: In this game we will have to help Jerry to get all the cheeses that will be scattered around the world, once we have collected all the cheeses we will be able to go through our hole in the wall, as we advance, the levels will go Getting more and more difficult and we will have to think very well about our next movement, since a false movement could mean victory or defeat, we can connect through holes that will be in the walls to go to even more secret places, after one levels we will meet Tom who will be waiting for us in certain segments of the level, remember to collect all the cheeses in order to get to your home and pass the level, Tom will be helped more and more cats so that it is difficult for us to get the cheeses, too there will be mouse traps that we will have to dodge, the game is very simple at first but it will get difficult through time,
Help Jerry to escape with all the cheeses and do not let Tom catch you, this game is available for Ipad, Iphone and Android mobile devices.
Tom and Jerry games here on kiz10
We have many games based on the famous cartoon of Tom and Jerry, just click on Categories and tags and look for the category you like the most, we hope you have fun and don't forget to have fun here on kiz10.
SHOW MORE

🕹️ What are the most popular Tom And Jerry Games?

❤️ What are the best Tom And Jerry Games to play on phones and tablets?

What are Tom And Jerry Games?

Tom And Jerry - Fun games of all kinds, kiz10 has an extensive catalog of free games do not stop playing and have fun